What was Flora’s Shaw contribution to the development of the British Empire?

One of the most influential women of her time

There were few women who came to public prominence for their associations with the British Empire but one who did was the journalist and writer Flora Shaw.  Attractive, charming, elegant and with an array of admirers Flora Shaw knew some of the most prominent people in late Victorian society and used her connections to further the cause of imperial expansion.She achieved national prominence as the first woman editor on a national paper when she became colonial editor on the Times, one of the most influential newspapers in the world. As part of that position, she travelled around the Empire writing pieces that brought far-away places in the Empire to the attention of the British public and when she married the Imperial adventurer Frederick Lugard, her position as an expert in British society was assured.

An early encounter with John Ruskin

Flora was born in 1852 in Woolwich, the third child of a captain in the Royal Artillery. Her mother's health was never good and Flora found herself running the family home. As an escape from the drudgery of looking after a large family Flora took refuge in the books she came across in Woolwich library. It was while Flora was in Woolwich that in 1870 she came to the attention of John Ruskin who had just been appointed Professor of Fine Art at Oxford. The subject of Ruskin's inaugural lecture was Imperial Duty and his words ushered in a new era in the British Empire - the last quarter of the c19th when the emphasis in Empire was to be duty and Britain's imperial mission to govern and improve colonies. Ruskin spoke in his lecture about how Britain should found new colonies made up of Britain's 'most energetic and worthiest men' and 'seizing every piece of fruitful waste ground she can set her foot on, and there teaching these her colonists that their chief virtue is to be fidelity to their country, and their first aim is to advance the power of England..' The lecture had a huge impact on Britain and ushered in the era of New Imperialism when empire was at the centre of British politics and when imperial matters were often discussed and related on the front pages of the new popular newspapers. Flora found herself as much affected by the ideas of Ruskin as was the nation and although she was soon to leave Woolwich to become a housekeeper in Aldershot, imperial matters were to remain an important part of her life. 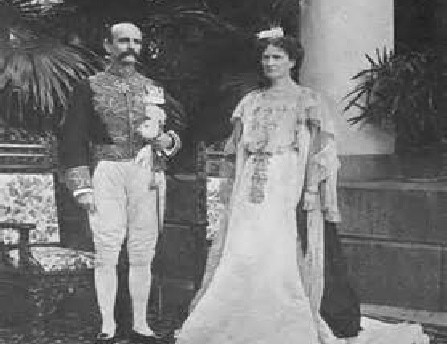 Flora and her husband Frederick Lugard 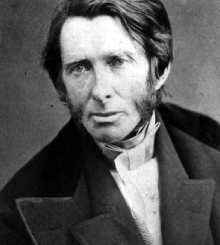 John Ruskin, left, who met Flora when she was eighteen, and her future husband, Frederick Lugard 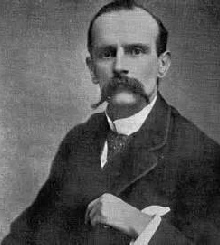 A Correspondent for the Times and Manchester Guardian

Living in Aldershot Flora must have become acquainted with stories  of the army and the empire but she was already beginning to write short stories and with the help of the novelist George Meredith, had her first children's story published to encouraging reviews. Flora continued writing having four more novels published whilst living in the East End of London where she worked as a social worker and teacher but her big break in journalism came in 1886 following a trip to Gibraltar when she interviewed Zobehr Pasha, A Sudanese political prisoner. Her article on Pasha was published and led to his release. Flora subsequently became a correspondent for the Manchester Guardian and the Gazette and began to travel around the Empire reporting on all kinds of matters associated with the Empire including the British occupation of Egypt and life in the army.

A Meeting with Cecil Rhodes

In 1889 Flora met Cecil Rhodes at the height of his power. He was by then founder of the De Beers mining company based in Kimberley and the major world producer of diamonds and also a major player in the gold industry on the Rand in the Transvaal. Rhodes came to Britain in 1889 to persuade the British government in 1889 to grant his South Africa Company a charter to enable them to build railways and telegraphs to the Zambesi and to encourage colonisation and trade by exploiting the mineral concessions that Lobengula, the leader of the Matabele, had granted to him. Having charmed the members of the government and the aristocracy Rhodes was to get his charter. Flora Shaw was by this time working for the Times and she lent important support for Rhodes' scheme in the paper. Flora had a huge influence on the way that the Times reported colonial affairs and such was her reputation by this time that the Manchester Guardian, never a paper to support British expansionism, kept Flora on as a freelance. 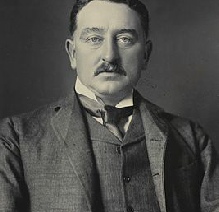 Exposing the conditions in the diamond mines

In 1892, Flora was persuaded to go to South Africa on holiday to recover from illness and exhaustion. She sent back to London articles about her travels and wrote about the working conditions of the black African workers working in Rhodes' de Beers diamond mines. It was at Kimberley that Rhodes instituted a system that was remarkably similar to that which was used during apartheid. Rhodes' white workers lived on a comfortable estate with their wives whilst 6,000 black workers lived in a compound connected to the mine by a wire passageway and were strip searched before and after their shifts of work. They were paid a £1 - a third of what the white workers were paid. From Kimberley Flora went on to Johannesburg and wrote about the growth of the mines, mining methods and the pastoral lie of the Boers. From South Africa Flora went on the Australia, New Zealand and Canada enduring during her travels all the hardships that travellers then suffered but meeting prominent politicians, rich merchants and settlers living on remote farmsteads.

By the time that Flora returned to London, to set up home in Pimlico,  she had become convinced of the importance of the empire to Britain and as reward for her work on her travels was given the post of colonial editor by the editor of the Times, Moberley Bell. Soon after her appointment as editor, Flora was approached by Frederick Lugard, known for his exploits in Africa, to review a book he had written about his time in Africa. Flora was impressed about the book as was the political establishment. Lugard was in Britain to campaign for the annexation of Uganda, a campaign which Flora took up by writing articles in the Times and helped Lugard to win an acknowledgement from the government that Uganda needed to become a British protectorate.

The Uganda protectorate was announced in 1895 and for the next five years Lugard and Flora Shaw kept up a constant correspondence in which they discussed African affairs. During this period Flora was summoned to appear before the House of Commons' inquiry into the behaviour of Cecil Rhodes preceding the Jameson Raid. Flora spoke about the telegrams between Rhodes and the Times, and impressed by her demeanour and command of her subject on the witness stand.

She invented the name of Nigeria

In 1897 Flora wrote about the situation in west Africa and invented the term Nigeria to describe the area at the mouth of the Niger river. It was during these years that Lugard was working for the Royal Niger Company initially to secure a treaty from the ruler of Borgu and then to command a military force to occupy the inland area of the Gold Coast and the Niger. his successes led to his being given the post of High Commissioner of Northern Nigeria. In 1901 Lugard was given six months leave and it was on this leave that he and Flora became engaged. She was nearly 50 with Frederick six years younger at 44 and when Lugard returned to his post in Nigeria Flora went with him to their home in Zungeru- one of the most  humid areas in Nigeria. It was because of the unhealthy living conditions and the likelihood of becoming seriously ill that Flora returned to England after a few months in Zungeru. She was to use her connections with Chamberlain to try to get the Colonial Office to introduce a scheme that would prolong the lives of many colonial offices working in west Africa. She suggested that those men of experience working in fever infested areas could have alternate their time in west Africa with regular periods back home in England. Flora was trying to work out a scheme whereby Frederick could maintain his commitment to Nigeria whilst maintain his health and their marriage. With the introduction of the telegraph why could Frederick not manage his administration from London in the pestilential summer?

Nigeria in 1901 with the north and south two separate protectorates with the northern part administered by High Commissioner, Frederick Lugard.

During her time back in England as well as campaigning for such a scheme, Flora entertained regularly, having people like the Prince of Wales, Lord Curzon, Baden Powell and Conan Doyle to dinner on a regular basis. She also went on speaking tours and began writing a history of Nigeria. Just as it might appear that Flora's scheme had been accepted by the Cabinet, the Conservative government was replaced by Campbell-Bannerman's Liberal government with a new Colonial Secretary, Elgin,  who she knew nothing about. Moreover the new Liberal government had a different attitude towards Empire and with the publica mood for empire changing after the Boer War. Flora never did manage to persuade Elgin of the merits of her scheme and when Frederick was recalled t London in 1907 the couple were sent to Hong Kong with Frederick as Governor.

After a year in Hong Kong Flora fell seriously ill and returned to England. She recovered and several years later she and Frederick achieved their ambition of Frederick becoming Governor of a united Nigeria. They were in Nigeria for four years during World War One until Frederick's term as Governor was completed in 1918. Flora and Frederick returned to live in the little house she had first rented in 1882, Little Parkhurst in Abinger, Surrey. 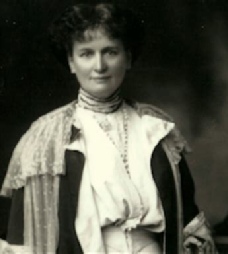 Running The Show by Stephanie Williams, 2012