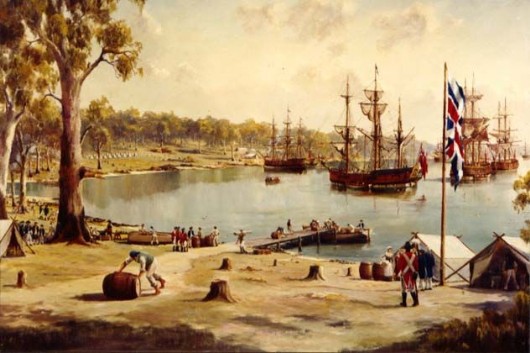 The arrival of the 1788 fleet in Sydney Cove
750 felons transported to New South Wales
In January 1788 a British fleet commanded by Captain Philip and including some 750 convicted felons ( including 190 women and 18 children) landed in Botany Bay, Australia, to found a settlement.  The land of Australia had already been claimed for Britain by Captain Cook on his last voyage and this settlement of convicts lay the foundations of what would be a new colony and a strategic base for Britain to control the Pacific Ocean. Captain Philip had been given command of the eastern half of Australia and adjacent islands and they would form the basis of a new empire in the Pacific.
The idea of Joseph Banks
The idea of a penal settlement in Australia had been made by Joseph Banks, the botanist who had served alongside Captain Cook. Banks was convinced that the climate and soil of New South Wales made it a perfect location for a new settlement and as the suggestion of a new colony came at a time when the American War was being fought, the Cabinet took up the idea. A penal settlement could be a symbol of British ownership and a strategic base at a time when an invasion of Spanish America was being considered.
The convicts would provide the muscle for the new colony
It was the hope of Captain Philip that the convicts would provide the raw muscle for the new colony which although a penal colony would still attract free men. Captain Philip maintained  strong discipline backed up by severe punishment for the convicts proved unwilling to work. The first few years of the colony were difficult with food scarce and supplies from England intermittent but gradually the colony established its own sources of food although for almost twenty years the officers of the New South Wales Corps, which acted as the guard force of the penal settlement, virtually ran the colony for their own benefit. 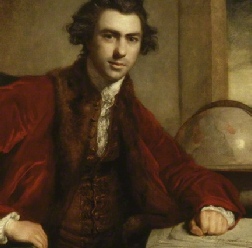 Joseph Banks
The beginning of a civilised settlement
From 1810, under the governorship of Lachlan Macquarie, the colony began to take large steps forward. Although Macquarie was a martinet and would not countenance an questioning of his word or methods, the colony began to acquire the trappings of civilisation. A police force was created, public buildings and new settlements were built and new roads created to link up the various settlements. Macquarie even tried to protect the native aboriginals who were regarded as the lowest ranked race of the Human race. It was Macquarie who encouraged the development of sheep farming and the establishment of a wool industry.
By 1821 when Macquarie  was replaced as Governor New South Wales had a population of 38,000 and sheep was the basis of the economy. There were 290,000 sheep in 1821 and over the next ten years exports of wool were worth £10 million. Sheep farming, and later gold mining were to be the basis of the new colony's future. By 1850 50% of Britain's imports of wool came from the colonies of Australia and this link with Britain's major industry of the time led to large scale investment of British capital in the Australian economy. 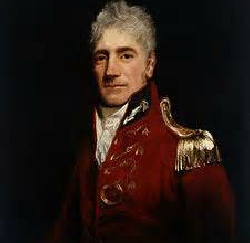 Governor Macquarie, of New South Wales
The ending of transportation
The transportation of felons continued for over fifty years, ending in New South Wales in 1840 and in Tasmania in 1853 but persisting in Western Australia until 1867. Although a large majority of convicts came from the poor and criminal classes of the urban and rural poor there were a number convicted of political crimes and this ensured that the population would have sufficient people of an  independent character and willing to question the British authorities.
The place of Australia within the Empire
Emigration from Britain to Australia stood at about 15,000 a year, sufficient to ensure that there were strong links with Britain and the colonies would remain British in character.  In future years this link with the mother country would mean that in the major wars of the late c19th and 20th centuries there would be large contingents from the Australian colonies. In both the Boer war and the First World war, the contribution of Australian soldiers was to be crucial in a number of campaigns. In South Africa Kipling saw the soldiers from the settler colonies as somehow embodying the future of the empire whilst all kinds of questions were asked about the future fitness of the British working class and its suitability to provide manpower for the military. 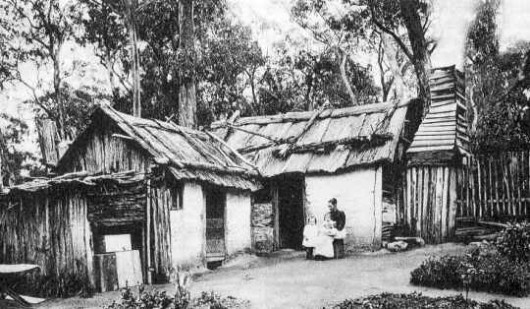 Settlers in New South Wales c1860
The development of British colonies in Australia (they would join together to form a federation in 1901) meant that the Pacific Ocean would be dominated by Britain until the rise of Japan in the 1930s. As Australia and New Zealand were colonies of settlement (along with Canada and to a lesser extent South Africa) and the settlers maintained strong links with the mother country and retained their British character and institutions, Britain remained a global power until after the Second World War.
For deails of the Aboriginal resistance to British settlement click here
Back to content