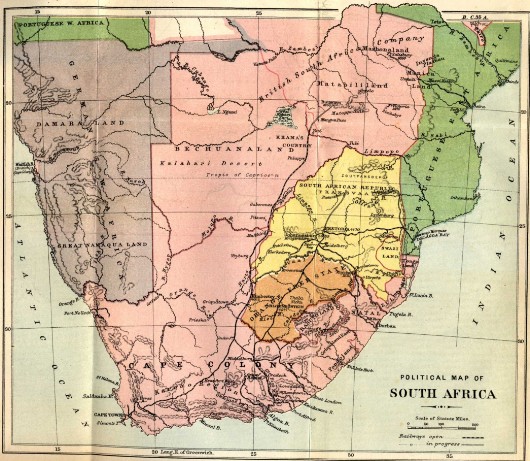 Matabeleland north of the Transvaal (in yellow)
Matabeleland and the Rudd Concession
When gold was discovered on the Rand in 1886 it produced a flurry of speculation about the possibility of gold being found north of the Limpopo, in Matabeleland. The explorer Mauch had speculated about this area being home to Ophir in 1871 and in the mid 1870s and 1880s further explorers including Frederick Selous gave validity to this view. Rider Haggard made Selous the model for his hero, Allain Quartermain, in King Soloman’s Mines published in 1885. This bestselling novel gave the legend further credibility.
The possibility of gold further north attracted President Kruger of the Transvaal and Rhodes, the diamond magnate from Kimberley in Cape Colony. There was though one major obstacle to a gold rush into this region. The land was the land of the Ndebele otherwise known as the Matabele. The king at the time of the gold speculation in the 1880s was Lobengula and he had an army of 15,000 to defend his kingdom. The Matabele were a warlike people who were feared throughout the region by less warlike tribes like the Tswana and the Shona. 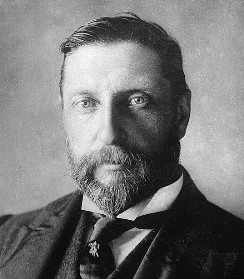 Rider Haggard's book on 'King Solomon's Mines' helped spread the legend of gold in Matabeleland
Anyone who crossed Lobengula did so at their peril
Lobengula was vigilant about who entered into his territory. There were border points defended by his army and the number of whites allowed into Matabeleland was strictly controlled. A few missionaries were allowed in as were some hunters for limited periods as long as they were in small groups. Visitors were made to realise that they were there on sufferance and if anything untoward happened such as visiting an area for which they had no permission there could be tragic consequences. Lobengula was unpredictable, cruel and fearful of white encroachment. Anyone crossing him did so at their peril. 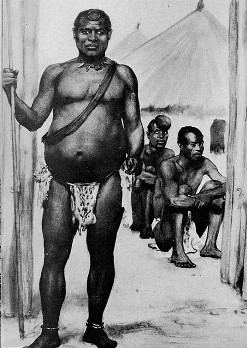 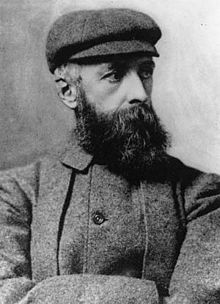 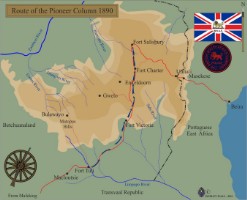 The route of the pioneers
Matabeleland wanted by Rhodes
Within a year of the Pioneer Column having arrived in Mashonaland to establish farms and claims for gold, Rhodes was receiving complaints about the desolate life the pioneers were leading. In October 1891 Rhodes entered his country for the first time. 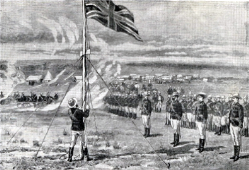 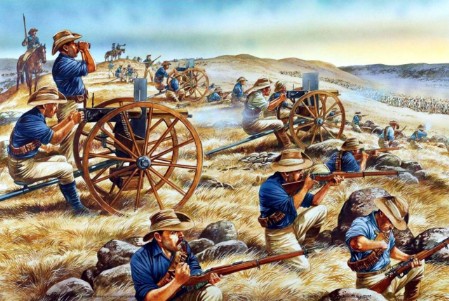 Using the Vickers gun for the first time in the 1893 Matabele War
The Matabele and Mashona rebel
The Ndebele had lost their tribal structure after 1893 but still retained the weapons that had been given to Lobengula as part of the Rudd concession agreement. Following Lobengula’s defeat in 1893 the cattle of the Ndebele had been looted and distributed amongst white farmers and they had been driven off their land after the British had authorised the Company’s takeover of Matabeleland in 1894. The Ndebele now were forced to sell their labour to the white farmers and this once proud warrior race felt humiliated. 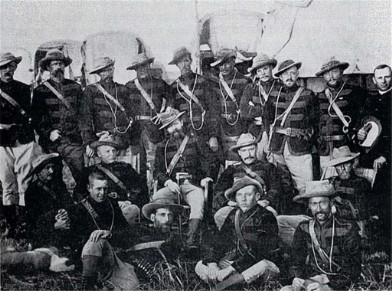 British South Africa Company police
With a herd of just 40,000 cattle where once they had 300,000, the Ndebele wanted revenge on the British who had forced a treaty on them which they renounced and then contrived to destroy them in war. With Jameson withdrawing virtually all his police for the Raid into the Transvaal, the 5,000 white settler population were defenceless. Within a week of the first attack on March 23, 140 white men, women and children had been killed. The attacks were launched with a ferocity that took the settlers by surprise and they decided to head to the nearest of the two towns in Matabeleland, Gwelo or Bulawayo, which became virtual laagers with rows of wagons with the corners defended with Maxim guns. Once these strong defences had been set up the settles sent out patrols to find missing setters and to test the military skills of the Ndebele. The Ndebele though had learnt from their defeats in 1893 and now adopted guerrilla warfare – only attacking the settlers when it suited them and remaining hidden otherwise.
By mid-April the Ndebele still controlled the countryside and the settlers were holed up in the two towns. By now the Imperial government had sent Imperial troops which helped to turn the tide. Rhodes was enjoying his first military experience and had himself made up to the rank of Colonel and was directing the defence of Gwelo. Rhodes had never given the impression that he was anything but a coward as far as fighting was concerned but he seemed to revel in confronting the enemy when he had the chance. He rode into battle with his white, dirty cricket flannels oblivious of the target he presented and seeming to court death. Was he seeking a glorious end to his life in order to salvage his reputation? 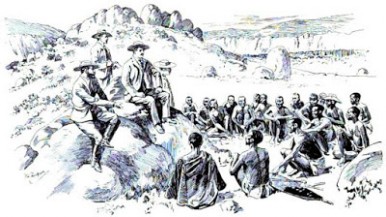 Rhodes discusses peace terms with the Ndebele
The Shona rise up
On May 19, Rhodes’ column linked up with a column from Bulawayo and together they defeated a Matabele force at the Umguza river. Five days later Major Plumer relieved Bulawayo with a force made up of regulars and irregulars. Several weeks later before the settlers were able to capitalise on these victories the Shona had themselves risen up and within a week had killed every settler within an 80 mile radius of Salisbury. The Shona too had had their land and cattle taken and had to sell their labour. The Company had always portrayed themselves as the liberators of the Shona –the uprising gave the lie to this claim and weakened the Company’s claim to legitimacy in London. Rhodes had previously taken away 150 from Salisbury to help with the Ndebele uprising and now Rhodes had to face the wrath of those living in Salisbury.
It was necessary to secure a quick victory but the Ndebele retired to the Matopos Hills - a mountain stronghold for them. To flush them out would have required a large army for which the Company did not have the funds. The Ndebele had 10,000 men guarding the hills and General Carrington lost 1,000 men in his early efforts to break the Ndebele hold of the hills. A drawn out campaign would have bankrupted the Company and so Rhodes sought a peaceful solution to the problem of the Ndebele. It was the thought of one biographer, Antony Thomas that the real reason that Rhodes sought peace was that on the occasion of a battle fought in the Mambo Hills, a body of a white man killed in the fighting was being carried back on a horse, when the body slipped off the horse and Rhodes caught sight of the pained expression on the dead man’s face. Whatever the reason Rhodes was determined to bring an end to the fighting.
Rhodes arranges a peace treaty
With the help of Johnny Grootboom, a Thembu from the Cape, Rhodes made contact with the Ndebele and a meeting was organised. Rhodes and four companions travelled to meet the Ndebele leaders passing through a narrow canyon with a bluff on one side and a thickly wooded valley on the other. They arrived at the appointed place and gradually Matabele gathered on the hills surrounding the designated clearing. Somabhulana was the chosen leader and he was surrounded by forty other officers. Somabhulana rose to speak and talked of the grievances of the Matabele for two and a half hours. When he sat down Rhodes asked why they killed women and children. There was silence until the reply came ‘because you did it first.’ And then Somabhulana gave his story of the first white killings. Rhodes gave the impression of being genuinely moved and then gave a number of concessions including the disbanding of the Native Police and a promise that he would stay to oversee the promises he had given. The promises were accepted and peace was agreed to.
Rhodes and his party were overjoyed as they rode back to camp and Rhodes stayed another eight weeks during which he continued to meet with Matabele leaders and make peace with them all. At one such meeting Rhodes was confronted by an angry group of young warriors to which he responded by walking into the middle of them, beckoning them all to sit down and then listened to their grievances.During one of these trips to negotiate with the Matabele, Rhodes came across the tomb of a former chief, Mzilikazi, and was so moved by the location that he said to his young companion Gordon Le Sueur, ‘When I die I want to be buried here.’
The peace with the Matabele was perhaps Rhodes’ greatest achievement and revealed a leadership quality he had not previously shown. The experience though did not change him. Rhodes did not keep his promise to the Matabele and he was to be as ruthless as ever in his dealing with the Shona situation. The land of the Shona was flat and difficult to defend and Rhodes had no hesitation in sending in military forces with sufficient Maxim guns and dynamite (for caves) to destroy Shona villages.
Following the defeat of the Matabele and the return of Company police to the territory, Rhodes travelled to Salisbury to meet with Mashonaland whites who blamed him for leaving the country defenceless during the Shona rebellion. Rhodes met with a deputation and he listened to each delegate air his grievances. Rhodes took copious notes without saying a word and gradually during his silence the settlers lost their nerve in the presence of the ‘great’ man. After the settlers had aired their grievances, Rhodes dealt with each one in turn, point by point, with the settlers listening in awe. They left the meeting having gained nothing.
On his journey back to Cape Town he was welcomed wherever he stopped by huge crowds. In Port Elizabeth forty old Rhodesians unhitched the horses from his carriage and drew him through the streets and then at every station between there and Cape Town crowds turned out in force.