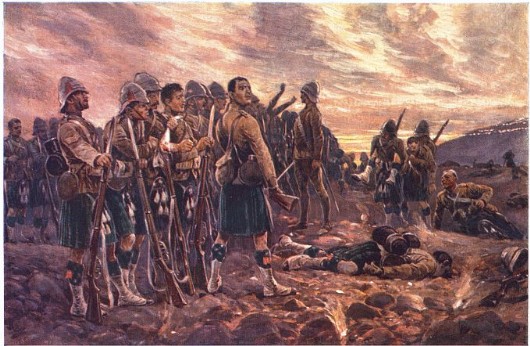 Highlanders at Magersfontein
Buller's army lands
On 4th November British reinforcements consisting of Buller's army corps of 50,000 men landed at Cape Town. The men were given six days off before proceeding north. Originally Buller had hoped to use the railway north from Cape Town towards Bloemfontein to carry all of the army  but White's incarceration in Ladysmith and the threat to the northern Cape of  General Olivier forced Buller to alter his plans. He now had to split his forces with Lord Methuen leading a force of 13,000 to relieve the besieged town of Kimberley. General Gateacre had a force of 3,000 to deal with Olivier whilst Buller led a force of 18,000 to dislodge the 8000 Boers under the leadership of General Botha at Colenso.
All went well initially for the British. Methuen was able to use the railway to move his force towards the Modder River which lay some 25 miles south of Kimberley defeating the Boers in a number of minor battles. Buller was able to advance similarly to within 15 miles of Ladysmith but in one single week in December, christened Black Week by the British press, the weaknesses of the British army were laid bare for the whole world to see. 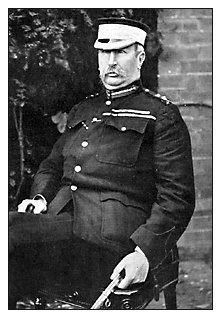 General Redvers Buller
Magersfontein - an early view of trench warfare
At the Modder River, after a few reverses and the loss of a few men returning home, the Boer commanders held a Council of War and de la Rey persuaded General Prinsloo that if the Boers took up defensive positions on the bed of the Modder, their guns with their flat trajectory could sweep the ground for over a mile in range. With the smokeless Mauser, the Boers could remain unseen until the last possible moment. At 4am on 28 November Methuen's forces began their march to the Modder. The men were full of confidence and suspected little. Just as Methuen was saying 'They're not here', a deadly volley opened up with men falling on all sides and others pinned down under the scorching hot sun.
During the following night though the Boers fell back. Methuen then gave his men two weeks to prepare for the pushing of the Boers off the Magersfontein Hills which was the last obstacle before Kimberley. This delay  gave the Boers ample time to prepare for the attack and they did so by not occupying the summit as Methuen would have expected but by again constructing a series of trench lines at the bottom of the hills-trenches that could not be seen as there was a screen of bushes in front of the trenches.
Methuen's guns opened fire on 10th December firing at  the tops of the hills where the Boers were expected to be. Unfortunately the Boers, as at the Modder, had dug deep, unseen trenches. Methuen's guns opened fire and the hill rocked under the 90 minute bombardment . Just three Boers were killed! The British forces then early on the 11th November moved off towards Magersfontein. There were 96 rows of Highlanders shoulder to shoulder. By 4am , despite a heavy storm and sticky conditions underfoot, the Highland brigade got to within a half mile of the hill when they were asked to spread out by their commander Major General Wauchope. As they did so the Boers opened fire and cut them to pieces. As day arrived hundreds of Highlanders were lying face down on the ground not daring to move and spent most of the day there getting themselves quite sunburnt in the process. The following day Methuen ordered a general withdrawal but the Boers as so often in the war were reluctant to pursue the British, thus losing an opportunity for a more convincing victory. 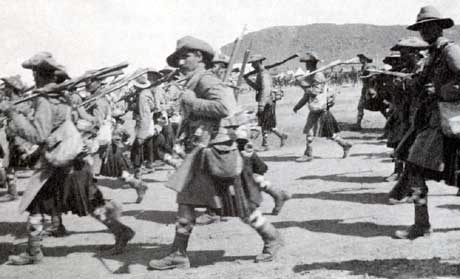 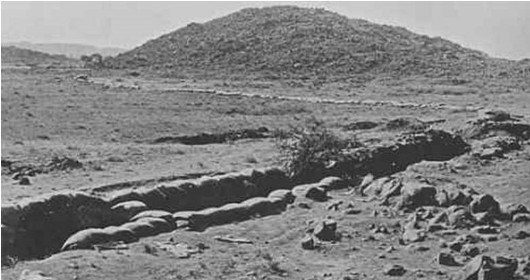 Boer trenches at Magersfontein
Stormberg
The same day as Methuen's forces were getting cut up at Magersfontein, General Gateacre was suffering a similar fate at Stormberg. On 9th November Gateacre had brought up 3,000 troops to Moreno in an attempt to defeat the Boer forces that were threatening the northern Cape. There were 2,300 Boers led by General Olivier defending the pass leading to Stormberg- a vital railway junction. Gateacre tried to outflank the Boers with a night march but without a reliable guide the force got lost and already having had no sleep for 24 hours were tired and disorganised. The troops' situation was made worse by the fact that they had to carry their rifles with fixed bayonets meaning they had to carry them at an angle. As dawn broke the force found themselves virtually surrounded by Boers on the surrounding hills.  In half an hour it was all over with the British losing over 700 troops (600 men of the Northumberland Fusiliers captured).
Colenso
Meanwhile Buller was preparing for his first assault on Botha's forces at Colenso where the road to Ladysmith crossed the Tugela river. For two days Buller's artillery pounded Botha's positions but received no response. The Boers did not give their position away and their exact whereabouts remained a mystery to Buller.
On 15 November Buller's forces began to move towards the Tugela in a frontal attack on where he thought the Boers were. At the front Colonel Long forged ahead with his 12 pieces of artillery (contrary to orders as he was supposed to remain behind the infantry). He got to within 200 yards of the river when the Boers unleashed a withering fire into the artillery which eventually had to be abandoned (despite Long's shouting, though seriously wounded 'We never abandon guns'). 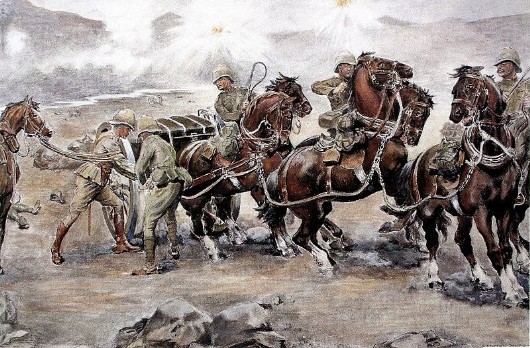 Trying to save the guns at Colenso
Elsewhere the infantry were pinned down in their frontal attacks with the Irish Brigade on the left flank and the Mounted Brigade on the right flank both failing to achieve their objectives. Buller ordered a desperate attempt to rescue the lost guns and in the rescue attempt Captain Freddy Roberts, son of General Roberts, was killed. The British lost 143 killed and 1,002 wounded to the Boers 7 killed as Buller ordered a withdrawal before midday.
These three defeats stunned the British public and brought a confused reaction. On the one hand there was the increased thumping of the British drum by those who wanted the Boers taught a lesson. On the other hand there was severe criticism at the conduct of the war and the justice of the cause. The Empire and Britain's position in the world was questioned leading to Britain being completely isolated although fortunately the USA was not anti-Britain despite the recent disagreement over Venezuela.
Buller replaced with  Roberts
Buller's weaknesses were shown up at Colenso. He had never been in command of such a force before even though he was a double VC winner. He was indecisive, often deferred to subordinates against his better judgement. He enjoyed his luxuries (his tent and champagne) and was far too cautious and slow in carrying out his plans.
As a result of Buller's reverse he was removed from his position as Commander in Chief of the British forces in South Africa and replaced with Field Marshall Lord Roberts, supported by General Kitchener. Roberts was widely popular and something of  a national hero having won the VC during the 1857 Indian Mutiny and a further distinction in the Afghan War of 1879-80. Kitchener of Khartoum, victor of the 1898 Battle of Omdurman was reserved and ruthless and together they made a strong team. Robert's appointment was all the more poignant as it was his son who was killed in the attempt to rescue Long's guns at Colenso.
Buller was still commander of the forces in northern Natal and anxious to make amends of his initial failure. Unfortunately his own shortcomings denied him the victory he wanted and in fact there were to be two more disasters in the attempt to remove the Boer forces from their positions on the northern side of the Tugela.