Go to content
What was the Raj?
What was the Raj?
According to the Dictionary of the British Empire and Commonwealth, the term 'Raj' is s Hindu word meaning sovereignty and refers to the period of British rule in India from 1858 when the British government took over the running of India from the Honourable East India Company (HEIC) until the British withdrawal of the British in 1947 after which the term came into general use.
The Indian Rebellion
The Indian Rebellion or Mutiny was the result of the HEIC trying to bring about a social revolution in India , imposed from above without the consent of the Indian people. The Rebellion was eventually repressed with brutality. In Britain there was much debate as to the origins of the troubles. For some like Gladstone the Mutiny was God's judgement on England for not spreading Christianity more quickly but for others (including Disraeli) the rebellion was the result of the  poor administration of India and the attempt to radically reform the country by trying to westernise it far too quickly. Whether the Indians were at all capable of advancement was hotly discussed and continued to be so.
The Empire and its Moral Dimension
In the last quarter of the century the British Empire acquired a moral dimension, that of seeing itself as trying to improve those territories under its charge and the question as to whether the nation was capable of advancement was one that would continue to be discussed. 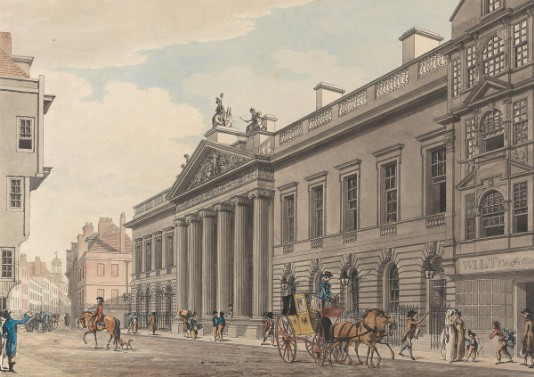 The End of the Rule of the East India Company
One lesson that was learned was that thousands of princes upon whom Britain relied to govern without the use of violence, had been alienated by the British reforms, particularly the Doctrine of Lapse, introduced by Viceroy Dalhousie in the years before the outbreak of the Rebellion. If the British were to remain in India they had to learn to keep themselves at a distance from Indian culture and religion and policies after 1858 reflected this new trend.
In 1858 the government of India was taken out of the hands of the HEIC with that organisation dissolved and put directly under the authority of the British government. Henceforth there would be a Secretary of State for India responsible to Parliament in London with a Viceroy in charge in Calcutta assisted by provincial governors, and assisted by councils. Following this takeover by central government, Queen Victoria  issued a proclamation in November 1858 in which she committed herself and the country ''to stimulate the peaceful industry of India, to promote works of public utility and improvement, and to administer its government for the benefit of all our subjects...''. This meant an end to the policies of trying to eradicate India's religions and customs and a reintroduction of an attitude of being more sensitive to the local customs of the Indian people. Grants to Christian mission schools were cut despite the opposition of evangelicals like Herbert Edwards who bemoaned that fact that heather customs were being respected.
Henceforth,  India's traditional leaders  were to become Britain's allies in the task of governing India. Those Princes who still had control of their traditional territories were strengthened in their privileges  and supported by the British with whom they now had common vested interests. Some  Princes found themselves being restored to their former lands and local landowners also found themselves  recipients of British patronage as the British sought to create a class of leaders who would remain loyal in return for having their ancient privileges confirmed.
Although the British policy of advancing westernisation came to a halt other reforms continued. Bridge building, telegraph laying and the extension of the railways became the focus of British efforts to develop India in a material sense.

Developing India became a priority
In 1857 railways in India were insignificant with just 288 miles of track. In 1859 a network was planned to cover the whole country (built and run by private companies but with profits guaranteed by the state). By 1900 almost 28,000 miles were open to traffic but progress in other areas was not as quick but did proceed steadily (in telegraph lines, irrigation ditches, sanitation and lighting, postal services and other public works). By 1900, 30 million acres out of 197 million were irrigated with 37,000 miles of metalled roads. The chronic famine situation though was eased but not resolved as the famines of 1876 and 1877 showed when inadequate rainfall led to 58 million people facing food shortages.
India was essential to Britain's Prosperity
Although Britain's mission in India was to develop it, it was not to be at the expense of the British economy. Had there been subsidies, tariffs or state enterprise there would have been greater development but in an age of greater economic competition from European competitors, Britain relied on India as a source for her exports. At a time when Britain was losing exports to Europe as France and Germany industrialised, India's import tariffs were lowered to enable British textiles to be exported to India which by the end of the century was receiving 60% of her imports from Britain. India was to become essential to Britain's economy and Britain to India's as Britain became the main buyer of Indian tea, raw cotton, rice and wheat. 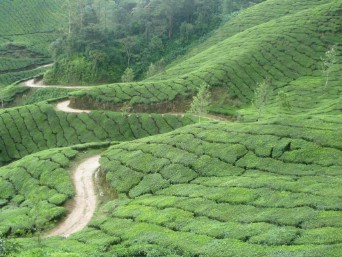 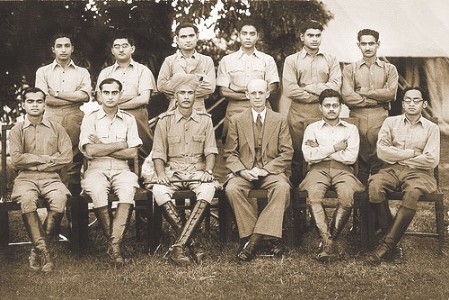 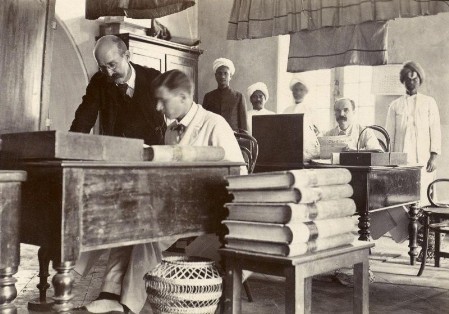 ICS offices at work
The Rise of the Indian National Congress
The abolition of the HEIC meant the end of attempts to westernise India but the secondary schools continued to provide an English education so that by the 1880s half a million Indians had been taught in English and been exposed to British political ideas and there were 8,000 Indians with degrees, many of them trained in London. The growing Indian educated elite wanted to play a part in the government of India and believed that they could change India from within and do as good a job as the British. The rejection of the Ilbert Bill though caused huge offence amongst Indian seeing the rejection as a racial sleight and an assertion of racial superiority.
Out of the Ilbert Bill came the Indian National Congress. The bill was abandoned in 1883 and just two years later in 1885 the Congress was founded, by a Scottish radical Allan Hume. Hume had once been an administrator in the north west provinces but had left the service as he became frustrated with the lack of progress on Indians serving in the service. The Congress was founded with the aim of providing a forum for the discussion of issues relating to their country especially how to  improve the education of Indians and how to get more representation in the government. The Congress made little progress as it had little money, no popular appeal and no nationwide organisation but as numbers of educated Indians continued to increase more and more pressure was put on the Viceroy. The demands of Congress were seen by successive Viceroys as the beginning of self government
The mystique of British rule could only last for so long. Although the British continued to develop the country, famine and drought continued to produce starvation as in 1895 and 1896 when more died than from the famines of the 1870s. Despite the intentions of the Indian Civil Service it was handicapped by its own bureaucracy and full of red tape. Lord Curzon was able to accelerate the pace of its work during his viceroyalty but things returned to normal after he left. Educated Indians began to demand reform and with increasing numbers of radicals and socialists in the British parliament there was increased criticism from London.
Hume had formed the Indian National Congress in order to channel the energies of educated Indians towards ensuring the permanence of the British state by giving them a stake in the running of the country but very quickly Dufferin and subsequent Viceroys saw the Congress as a nuisance and increasingly as a threat to the stability of India. Government  did not want the loyalty of the collaborating classes - the clerks, telegraph operators, railway officers and the Princes - to be questioned. The more the government resisted the demands of the Congress the more vocal it became and the more support it gathered. English was spoken by the educated classes and this became the unifying  force which promoted a form of nationalism.
The British response was the Morley-Minto reforms of 1909 which granted Indian participation in the election of provincial and national councils but it was clear that parliamentary responsible government was not on the table. During the First World War the Indian people remained loyal to the British Empire but continued racist attitudes during the war made it certain that the impulse towards responsible government would only gather in momentum.

Updated May, 2019
Peter Crowhurst
Further reading
Back to content