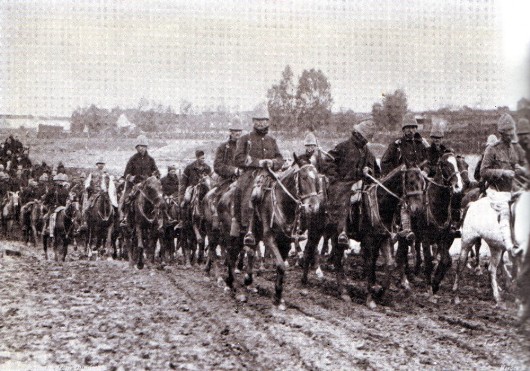 The British retreat to Ladysmith
Ladysmith
Ladysmith, in northern Natal,  was the first of three towns that were besieged. Elsewhere in the west of Transvaal, Boer forces advanced upon the strategic towns of Kimberley and Mafeking, both in the very northern part of the Cape Colony. Kimberley was already famous for its diamond mines - Mafeking was about to become famous for the way it was defended under the leadership of Lt Colonel Robert Baden Powell.
At Ladysmith, maintaining the siege was regarded as an achievement by General Joubert as it meant that the British could not launch an offensive against the Transvaal but the decision has been heavily criticised as a major miscalculation which has been regarded as one of the major tactical errors of the war. The siege diverted thousands of troops from offensive campaigning and kept them idle against the military culture of the Boers. The commandos had not been raised to conduct fixed siege operations and it was not long before Boers were leaving their posts and returning to their farms for the harvest. Joubert was regarded even by many Boers as past his time-a 68 year old general who was judged to be too cautious, irresolute, feeble and timid. He was also too committed to his afternoon nap and his household comforts for he was accompanied by his wife Hendrina, his household servants and the household cattle. Joubert was a mediocre commander who had got as far as he did because of political cronyism. 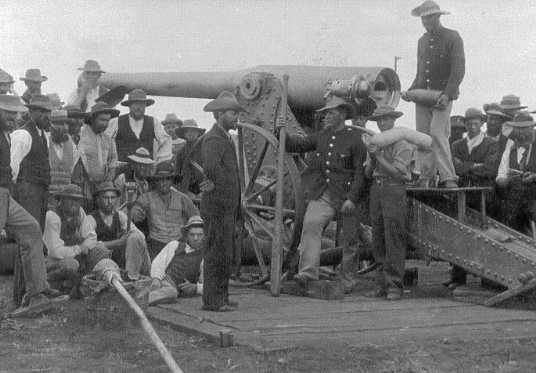 A Boer Le Creusot gun used during the Ladysmith siege
At Ladysmith both sides seemed to settle for tit for tat shelling. the Boers had a number of Creusot guns which fired daily into the town but with little impact. Much of the civilian population had been evacuated into the nearby field hospital at Intombi. The besiegers rarely looked as if they had the will to take the town. As for those inside Ladysmith, despite dwindling supplies and grim conditions which led to about 10 deaths a day, it never looked as if the town was going to be forced to surrender. The Boers encircled the town within a six mile radius but the British themselves constructed a smaller defensive ring. The Boers hoped to starve the British out whilst keeping Buller at bay. What was required was reserves of patience rather than valiant deeds. There was the occasional foray to try and destroy Boer positions but these usually ended with  a heavy loss of life.
On 6 January the Boers made their only real attempt to break through when they attacked Bester's Ridge. 2,000 Boers attacked the ridge at night but were held off. Fighting went on during the following day but with reinforcements  and the use of the bayonet, the Boers pulled back as the next night approached. There had been 400 British casualties with 200 Boer losses.
Kimberley
At Kimberley 4,000 Boers hemmed in 500 British troops and 50,000 civilians. The British commander was Colonel Kekewich but the dominant person in the town was Cecil Rhodes. Apart from his 500 regulars Kekewich had the use of the town guard of 3,500 civilians and the facilities and arsenal (450 guns) of the De Beers operation that was able to manufacture ammunition in its workshops. Here the garrison was not idle and made a number of sorties against the Boers. Kimberley was never in any danger of being taken as there were no surrounding kopjes as at Ladysmith. It was just a case of waiting for the arrival of Methuen's forces from the south. The mining operations helped the town in several ways-the miners themselves were able to construct a system of tunnels in the river banks in which many of the women and children sheltered. Heaps of debris from the mines were heaped high in tips that enabled strong points to be established and observation towers were erected on the top of hauling gear that gave advance warning of incoming shells. On February 7th, the Boers began to shell the town with their Long Tom. The huge shells screeched into the town's residential area killing women and children and terrorising the civilian population although at least they were able to reply with Long Cecil, a gun that had been constructed in the De Beers workshops  and could fire 28lb shells.
Mafeking
At Mafeking 8.000 men and 12 siege guns under General Cronje surrounded the town under the command of Robert Baden Powell who had 745 soldiers under his command and 450 volunteers. The Boers had 10 modern pieces of artillery including a 94 pounder Creusot. Makeking was a small border town of 1500 white inhabitants (and 5000 villages of native Barolong and Fingo outside the town) at the junction of three territories and the railway from Cape Colony to Rhodesia passed through the town. It became a symbolic siege without much strategic importance. It lay just ten miles from the Transvaal border so supplying the besieging forces was not a problem. It was also from here that the Jameson raid of 1895 had started giving the town additional symbolic importance. The town though had been ignored by the Cape authorities and had few defences. It had a small white population and was too remote to be defended. Eventually the town authorities persuaded Baden-Powell to base his Bechuanaland Protectorate Regiment in the town. 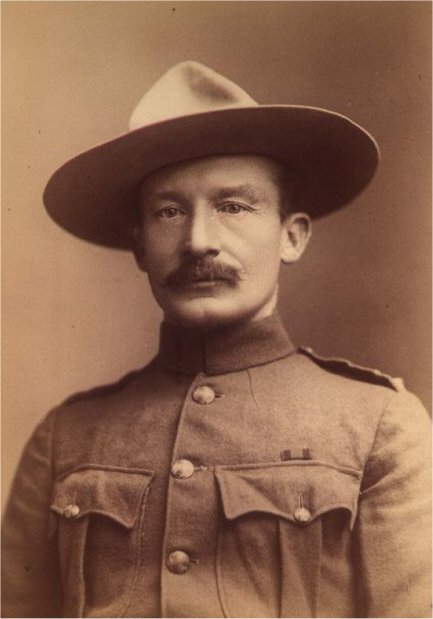 Baden Powell was in command of the British forces in Mafeking
As Powell's forces fell back on the town there was some skirmishing with Cronje's Boer forces but once the town's defences had been consolidated by the middle of October there was little real fighting thereafter. In fact the Boer forces were reduced to little over 2000 causing some to ask whether there really was a siege. With Boer forces becoming rather thin it was possible for communication with the outside world.
The Mafeking defences stretched in a five mile perimeter around these populations and consisted of hastily constructed forts. With so little trained troops Baden-Powell had to create a Town Guard which was not all that popular among a civilian population that resented the siege. Both sides used Africans to defend their positions and in the case of the town to maintain communications with the rest of the world. A fit African could earn £15 for taking messages for journalists wanting to get their stories to London papers. Much of the hard labour of digging trench emplacements was done by Africans- this was certainly not just a White Man's War.
Within the town Baden-Powell was not the hero that he was portrayed in London. He was to solve the problem of a shortage in supplies by driving out those Africans who were surplus to requirements. For those in the UK though he came to epitomise the plucky 'brit'. he was autocratic, firm minded, humorous and ruthless. Underground shelters were built for women and children and he was able to construct an armoured train in the railway works and he had an old cannon transformed into a working piece of artillery able to fire 3000 yards. Another gun was actually made in the workshops capable of firing an 18 lb shell 4000 yards. 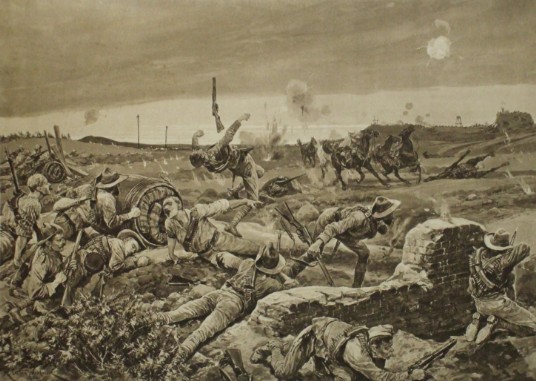 British defenders at Mafeking
The siege was conducted on gentlemanly lines with no fighting on the Sabbath, and no firing on the convent, the Victoria Hospital, the mule powered ambulance or the camp established the town for women and children. When these conditions were broken there was lengthy correspondence between Baden-Powell and Cronje. The one issue over which the two commanders differed was over the use of Africans to bear arms. Baden-Powell denied that he did but he came to rely on Africans to defend the perimeter. Apart from a poorly executed attack on 31 October by the Boers and a British attack by the armoured train in December which resulted in 24 dead, there was little offensive action.
Baden-Powell's main problem was maintaining morale and supplies. The Africans in their camp suffered badly at times as there was insufficient pasture for their cattle and no mealies to crop. Eventually Baden-Powell set up soup kitchens with horsemeat on offer but there were few horses available so instead had to exist on locusts and stray dogs. The majority of deaths were among the African community from disease.
Back to content